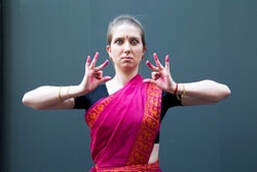 Yatrika began her formal training in Bharatanatyam at the age of six from Smt. Mythili Kumar, Founder Director of the Abhinaya Dance Company of San Jose. She first performed on stage in Abhinaya’s 1999 production “The Power of Saturn” as Nala and Damayanti’s daughter. In addition to being selected for roles in company productions from a young age, Yatrika grew up performing in annual school shows and at various venues around the San Francisco Bay Area.  In 2007, Yatrika completed her Bharatanatyam Arangetram and continued to perform and grow as a young company dancer with Abhinaya Dance Company. Yatrika has participated in collaborations with Gamelan dancers and the San Jose Taiko drummers, has performed in the prestigious San Francisco Ethnic Dance Festival for many years, and has toured with the company to Los Angeles, New York, and St. Louis. Yatrika began teaching Bharatanatyam to the next generation of dancers in Abhinaya’s school in 2007, and has mentored students preparing for their own Arangetrams. In 2011, she performed as a senior dancer in Abhinaya’s Next Generation Soloist Series. In addition to dance, Yatrika trained in Carnatic vocal music for twelve years under the tutelage of Smt. Jayashree Varadarajan, and completed a solo concert in 2008. In 2014 when Yatrika relocated to New York for her graduate studies, she joined Navatman wishing to stay connected with Bharatanatyam and to continue her growth as a dancer.

Guests: Sri Thina Subramaniam
Older members:
Many dancers have come to help bring the troupe to what it is today. We applaud those dancers who have created time in their busy schedules to manage this company!